skip to main | skip to sidebar

THE TEXTILES OF OAXACA 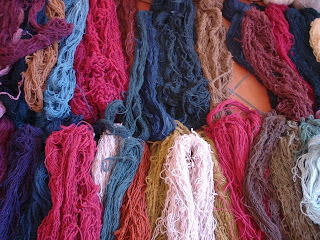 In her recent travels through Mexico, while visiting artists and searching for 'hidden treasures', Lucia took time to visit a group of artisans, specialising in the traditional art of textile making. Throughout the Oaxacan Sierra there are several groups that continue to produce these gorgeous, hand-made tapestries, but Lucia knows, and has for years been friends with a group which produce nothing but the most impeccable and masterful work. Nowhere else has she found as much quality. Walking through the working site this time, she thought it would be interesting to share a little of what it is these skilled and professional artists do, and above all, the importance of a little insect called the 'cochinilla.' You'd be amazed at what the human being is capable of creating from the use of one, tiny insect.
The cochinilla is a tiny bug that attaches itself to the nopal cactus and since the 1700's it has been known to produce one of the strongest red dyes known to humankind. In fact, in 1758, Oaxaca exported over 1.5 million pounds of the pigment to Europe, Africa and Asia. During the 1700's, cochineal or 'cochinilla' as it's called, was the most valuable commodity on the world stage next to gold and silver. It created the most majestic shades from intense reds to deep purple.
You can find all kinds of information on the web, but the process for making these textiles begins with the cleaning and carding (brushing and washing) of the natural fibres, the spinning, the dyeing with natural pigments and then the hand-weaving of the rugs. The pieces Lucia has brought back are the best quality you can find, because evidently (and sadly we must add), copies and cheap imitations are produced throughout Mexico everyday.
Posted by D-ENGUE